In our 0.18 app release, we updated the Defensive Plays to be Normal, Prevent, and Blitz. With 0.19, we’ve added visual effects on the field for you to see how the Defensive players you drop on the field will react when placed within different Defensive grid zones.

There are three basic types of Defensive play calls:

A standard and balanced defense focusing on player’s core position and type behaviors.

Normal works well in most situations but can be vulnerable to an aggressive offense Deep Pass or Short Run and Pass gains.

A conservative defense that bets on the Offense going for a deep pass play. Players will shadow their offense targets and create zones deep downfield to stop long passes.

Prevent works well to stop big gains but is vulnerable to runs or short passes.

An aggressive Defense to disrupt passing plays. DL and LB positions will all rush the QB and attempt to sack.

A Blitz Defense is vulnerable to pass and deep pass plays if the QB can get the ball off in time.

The defensive grid will appear when you begin to drag a card from your deck to the field. Depending on the play call and Player type a Defense Behavior will be displayed based on where in the grid you drop him. 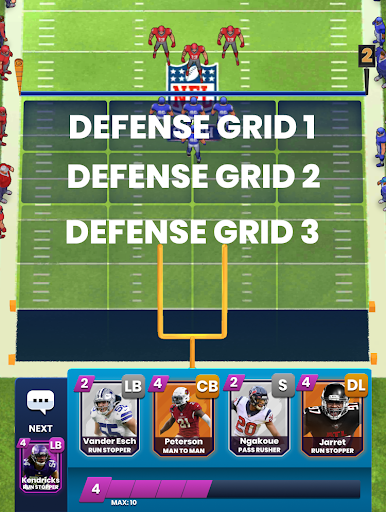 You will see these behaviors change on the field as you drag your player over each of the Defensive Grid Zones.

Defense Behaviors change based on the Play Call, Player Position, Player Type, and where you drop them in the grid.

Lock On, Shadow, Rush, and Zone

We hope this helps with your Defensive strategy!